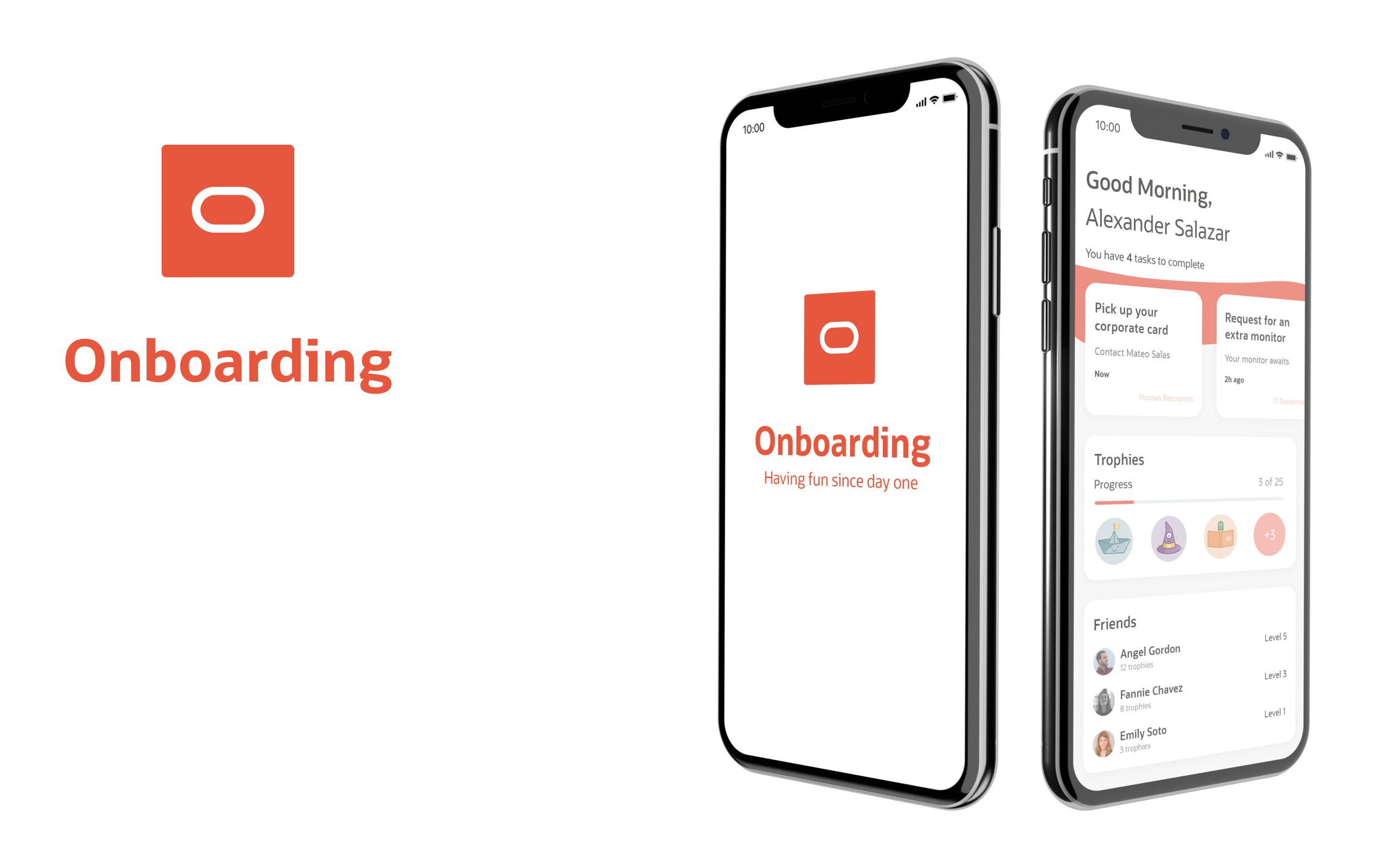 This side project was born during my days at Oracle as part of a series of initiatives named constant improvements.
‍
This idea originated from the need to improve the onboarding process for new hires, seeking to maintain Oracle’s status as an innovative and high-tech company.
‍
I took this opportunity to experiment with new technologies, integrating augmented reality into the onboarding process to provide a new but yet familiar concept, taking advantage of the success of applications such as “Pokemon Go.”

Let’s face it most onboarding processes are boring and are expected to be so. They usually lack a clear estimate of time to complete; in other cases, the time may not be enough, having to complete them just because it’s one more duty.
‍
The starting point was a brief audit of the process and onboarding tools in order to identify areas for improvement and pain points. The findings were then divided into key points for enhancement and possible solutions.

Information overloading
Narrow down the list of activities and get rid of the checklist format.

Culture assimilation
Get to know the company and your co-workers innovatively.

Customize experience
‍Complete tasks at your own pace.

Further analysis began by reviewing the onboarding in other companies and in different media to find more points of improvement and extend the future scope of the project. 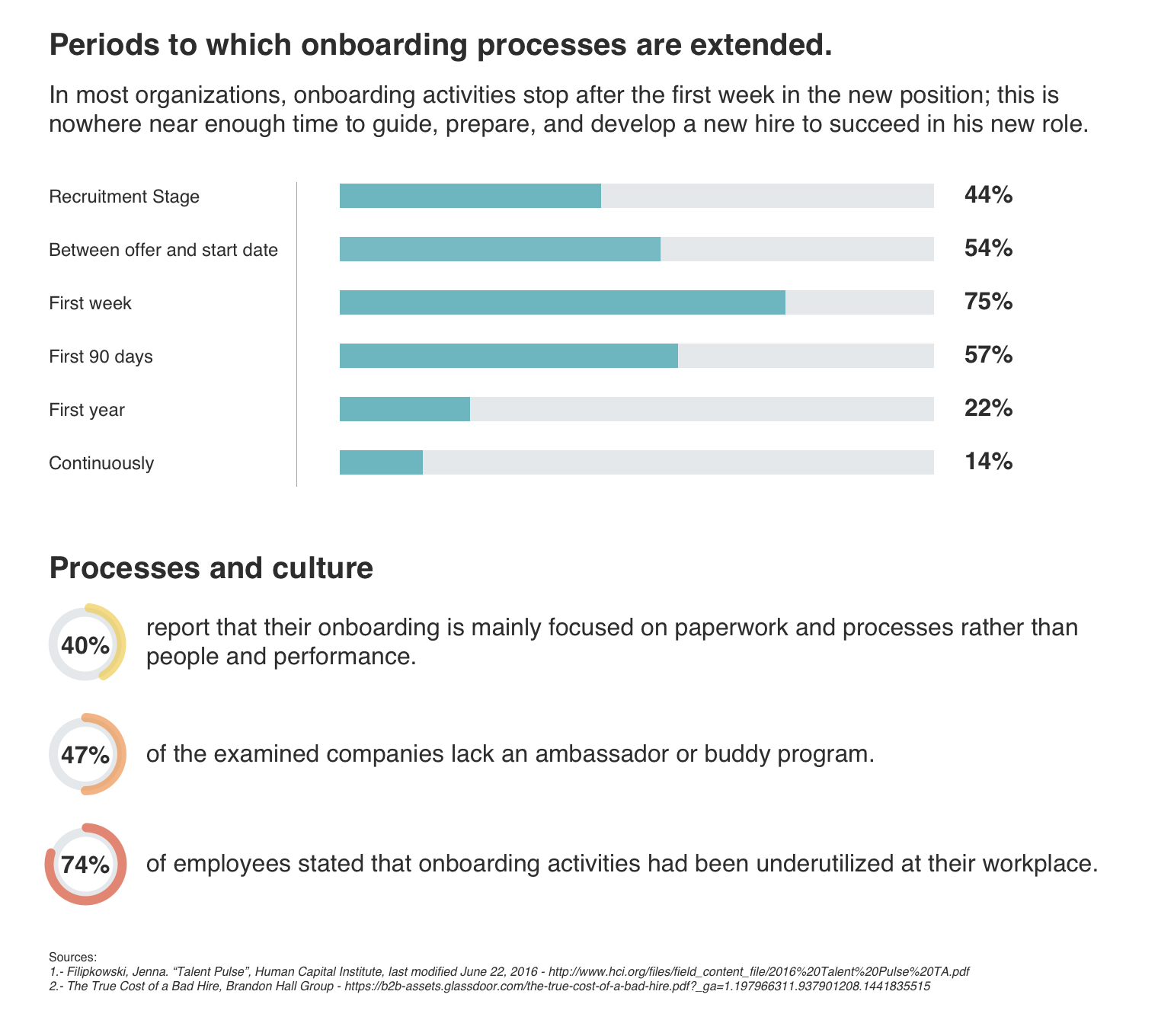 Finding that most onboarding processes are:

After evaluating the results of the external research, some informal surveys were conducted to obtain quantitative data, as well as some interviews with small groups of employees for qualitative analysis. This data would be used to assess and determine the needs and opinions about the onboarding. Finally, employee satisfaction levels were obtained, as well as their likes and interests. 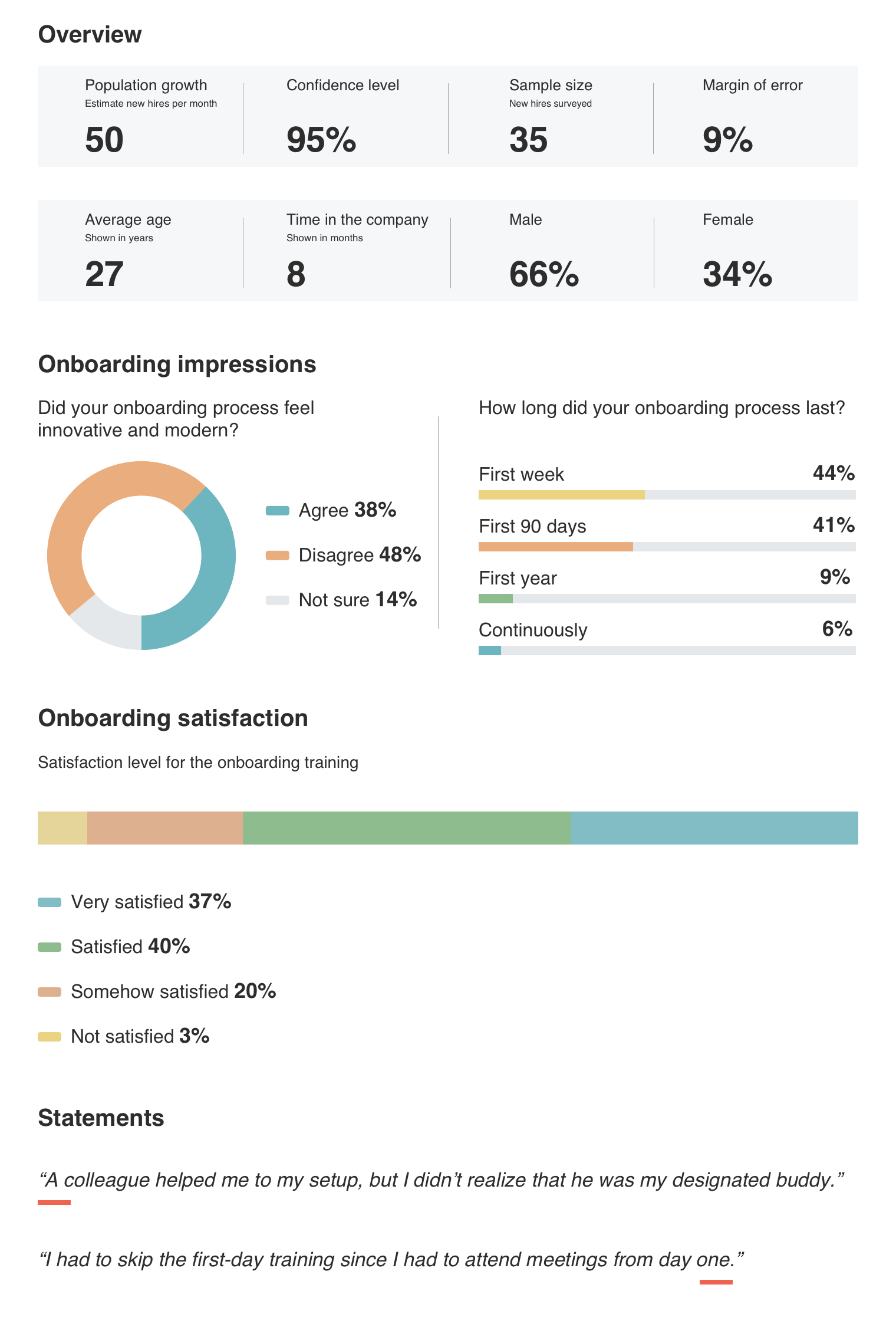 The results would show that the overall levels of satisfaction with onboarding were good in the interactions during the first week. However, there was plenty of room for improvement in the long term experience, as well as continued use of onboarding and first impressions, which were found to be very standard and far from innovative.
‍
Additional findings showed that most employees were gaming and sports enthusiasts, with a strong affinity to high-tech culture.

The main goal was not only to improve onboarding but to continue to attract young talent eager for new challenges and to change the traditional office space by offering an interactive experience in the form of a game, providing a modern and fun environment from day one.
‍
This new approach would bring a significant advantage, taking less time from managers and HR employees to train new employees, achieving a higher payoff in less time. All this would help newcomers to assimilate the company’s procedures, systems, and culture in an unique experience.
‍
So it came up the idea of an application that would make use of augmented reality to navigate within the work area, following key points for the employee and introducing them to their new colleagues and surroundings.
‍
This new application would allow tackling the points of improvement found during the research.

Make it Fun
‍Encourage the use of the application as a frequent source of support in a playful manner.

Innovation
‍Use cutting-edge technologies that drive the exploration of the company's values and culture.

Meaningful
‍Provide a welcome with a unique and personal touch that relates to the young audience.

Collaboration
Inspire workers to get involved in the development of new ideas and product implementation.

For the first iteration, the flow was very straightforward, with only 3 tasks to follow and complete for each round. For the interaction, this would mainly focus on exploring the workplace, encouraging employees to discover their surroundings.
‍
Once the flow and wireframes were ready, it was time to try this new concept. For this, a prototype was presented to some newcomers to have a recent comparison of the current onboarding process. 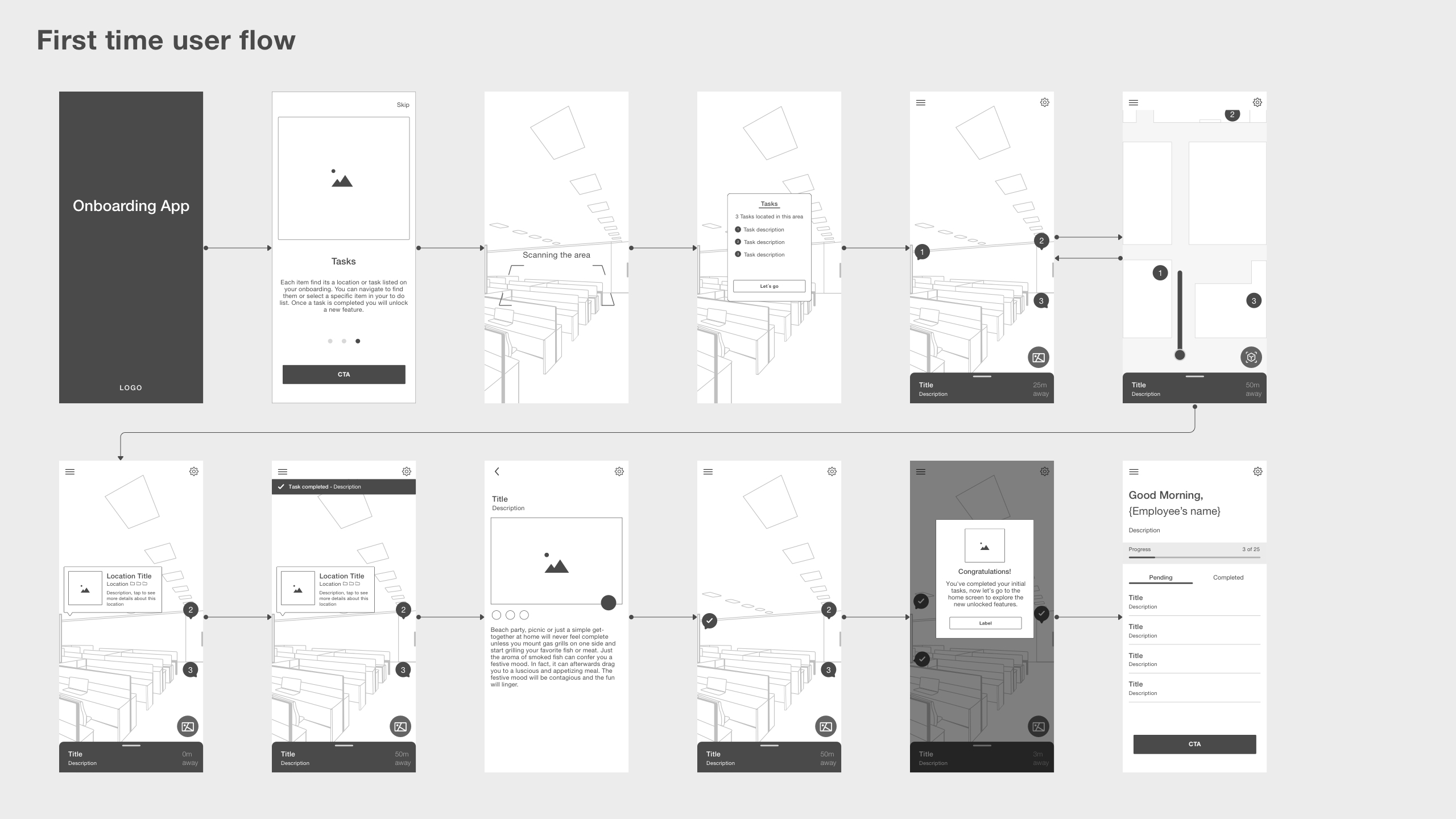 Demo
‍
After completing the tests, it was necessary to present the idea to some stakeholders. Therefore a demo was implemented, highlight the main features of the application and taking new ideas based on the feedback received from the test group.
‍
This demo would serve as proof of concept to continue expanding the idea and serve as a guide for the final stage of the prototype.

With the demo and pitch ready, the next stage was to resume the evaluation of the test results, still finding areas for improvement.
‍
First, noticing a lack of accomplishment at the end of the task. The fun factor was there, but there was no reward for achievement.

The second discovery was the difficulty of completing some tasks through exploration alone.

So the main approach was re-evaluated, merging now the exploration with a set of push up notifications that include recommendations and hints for specific areas and activities based on the level of completion. 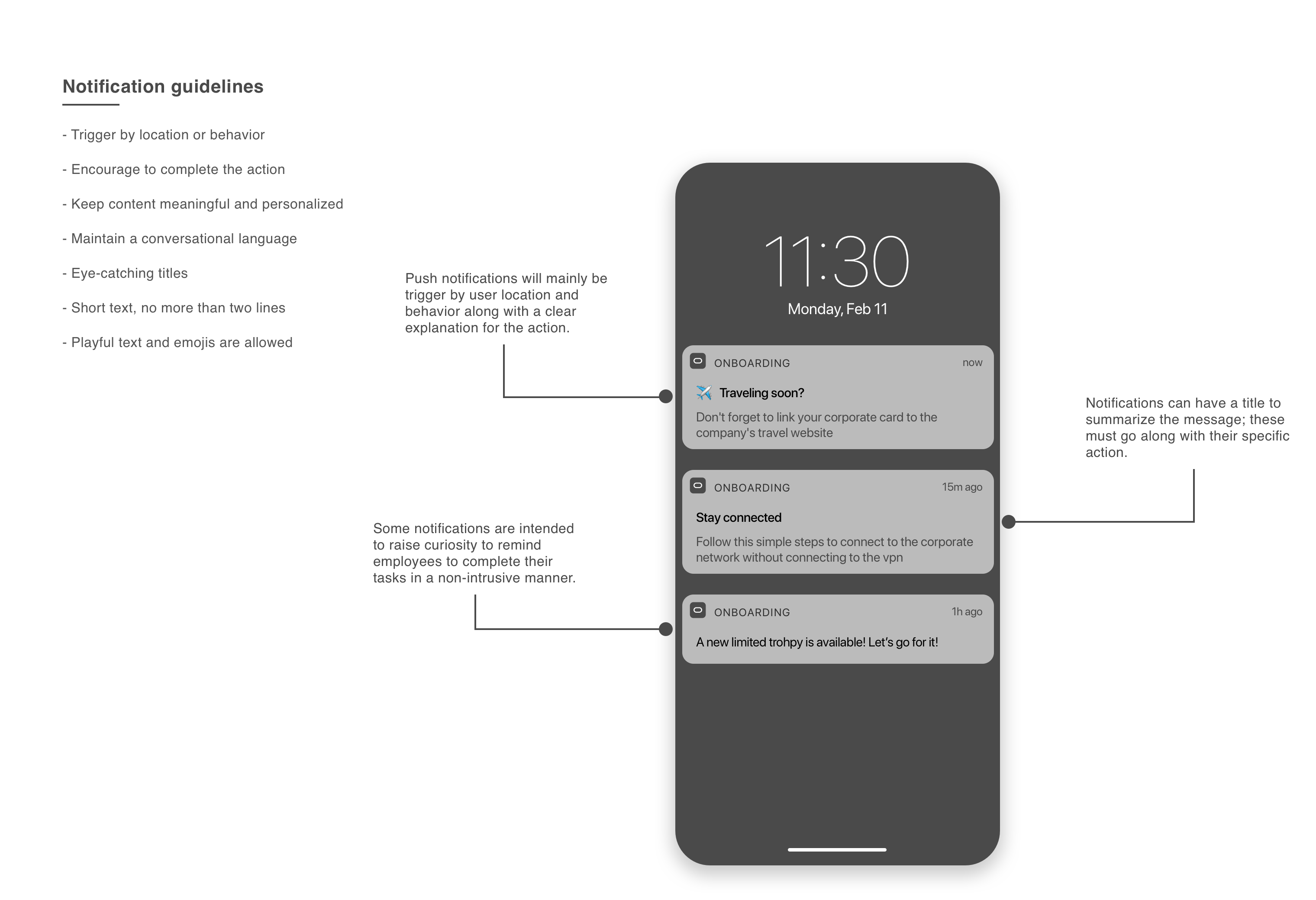 The second feature added was a series of trophies and collectibles that would be acquired as the user completed the task, giving a sense of achievement in a fun and friendly way.

The demo served as an opportunity to explore this concept, which led to early feedback and a much better foundation for them. 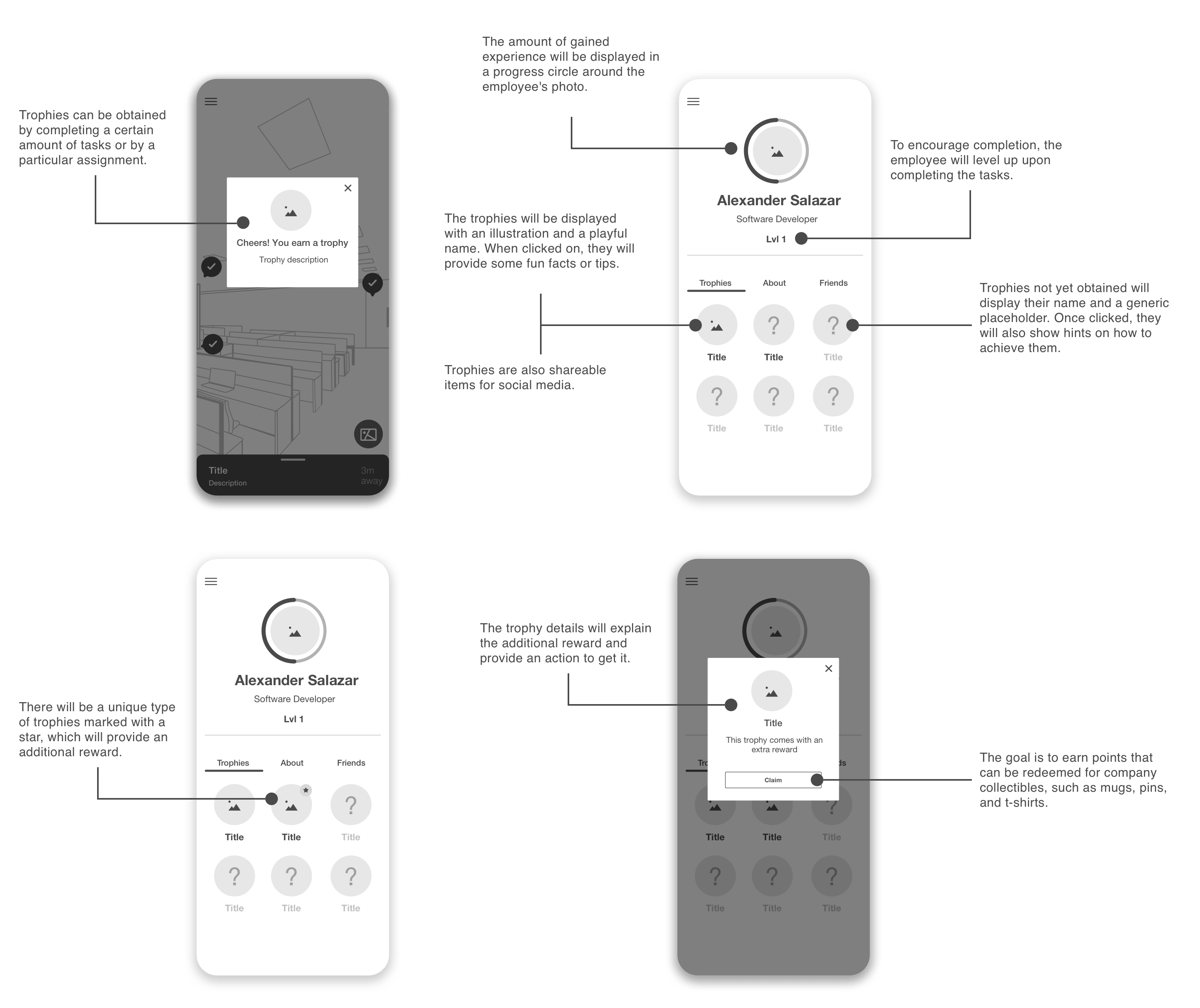 Design proposal for the trophies

Finally, the mockups serve to experiment a bit more with aesthetics, taking advantage of the rebranding that Oracle was going through. In this way, the onboarding would have a modern look and feel that would be in line with the intention of a modern and innovative application. 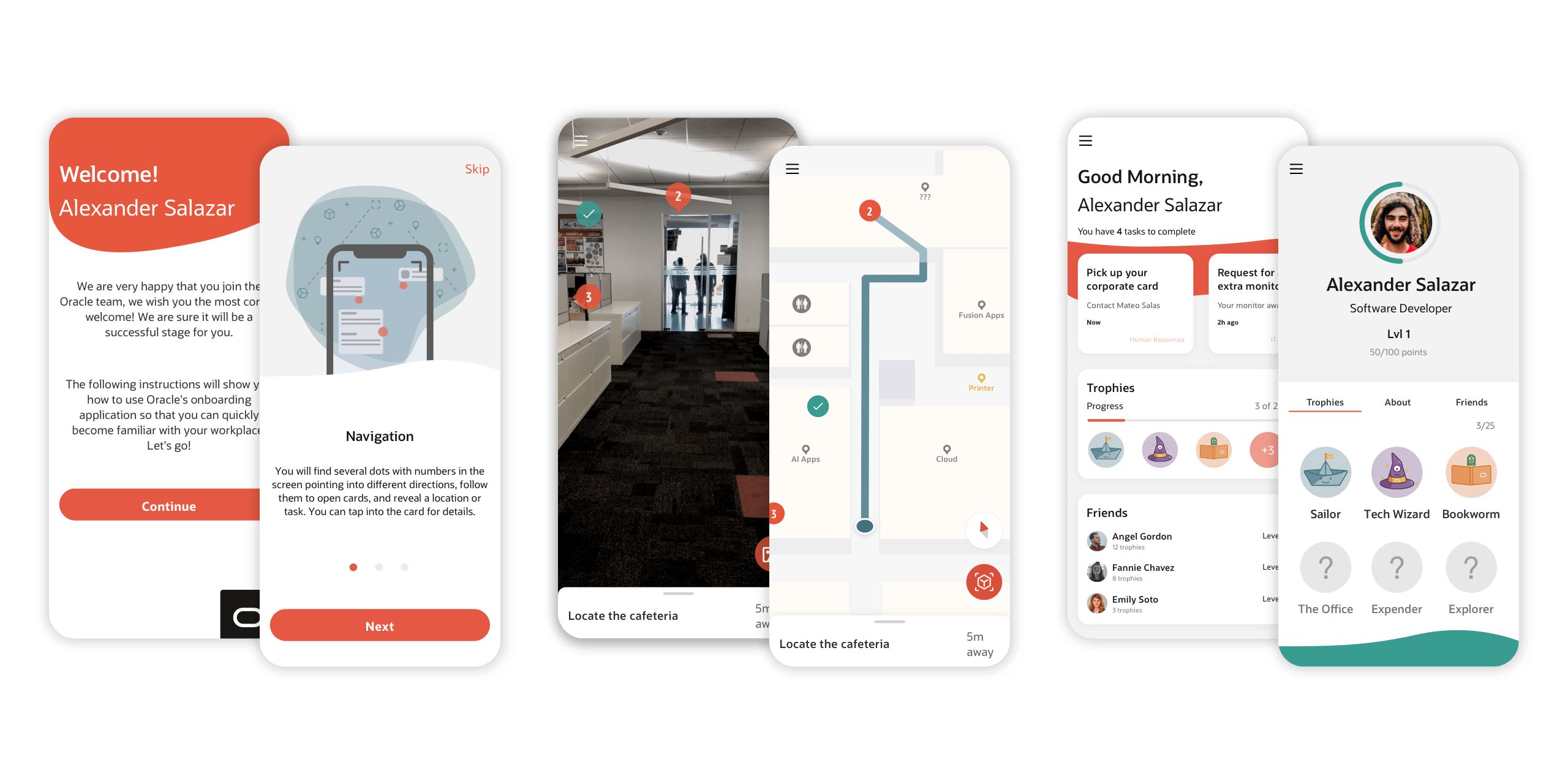 Since this was a side project, most of the work had to be done in between other activities, which did not allow to establish a proper working methodology. However, testing out our ideas in the early stages of the process led to faster iteration and problem-solving, delivering a better concept and design.
‍
Also, presenting this project to different areas of the company helped me out to see the importance of storytelling and improve my skills in this field.
‍
Ultimately this project would serve as a proof of concept for other initiatives that would help redefine the approach to new applications and their use of emerging technologies—taking back the innovative and groundbreaking spirit that characterizes the company.